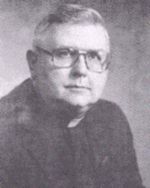 This Saved My Priestly Life

During Vatican Council II and the years following, Fr. Richard Gilsdorf, Ph.D. in Sacred Scripture was an instructor in a seminary. He followed the Council avidly and was elated by its progress and promise. Yet soon he realized that, apart from all the spiritual and doctrinal good that was being drawn forth from the Council, a non-orthodox spirit was emerging. It was a spirit of free interpretation that was not interested in reading the documents. It was the year 1966, and at this crucial point in his priestly life, he read a brief news account about the apparitions of Garabandal in Spain. It was such a special grace that he does not hesitate to affirm, “It saved my priestly life.”

“It was a special grace, a gift of discernment from Our Lady of Good Counsel.”

After having received this grace, he began his doctorate in Sacred Scripture. “The need to discern became all the more urgent...”

Once he finished his doctorate, he returned to his diocese, but the seminary was already near dissolution. He was assigned to pastoral work. Through all those years, he kept carefully informed on the events and Messages, the “words and deeds” of Garabandal, which sustained him and literally “saved” him during years of intense, spiritual suffering.

“I was powerfully stimulated, as I said, by the announcement and progress of Vatican II. It was an unexpected joy that so early in my priestly life such a historic event should occur. I was rooting for what then was tagged the ‘liberal’ or ‘progressive’ side. When I learned, in 1966, about the reported apparitions in northern Spain, it struck me as more than a coincidence that the years of Mary’s ‘residence’ in Garabandal concurred with those of the ecumenical council. Just how one should interpret that fact is not easy to surmise. Perhaps Garabandal was to stand as Heaven’s commentary on the acta of the Council, giving the faithful a key to the genuine meaning of Vatican II and an antidote against the ‘spirit’ which soon would be propagated. Whatever the case, the mere coincidence sounded an alarm for me to evaluate the tides of change with utmost care.”

The importance of the Eucharist in Garabandal’s Messages stands out in his testimony: “It’s the core of Mary’s message. As the Council so magnificently asserted, this Sacrament is ‘the source and summit of all Christian life.’”

During the years in which the Virgin Mary visited Garabandal, “Mary directly and indirectly focused our attention on the Real Presence of her Son. ‘Why don’t you visit my Son more often? He waits for you night and day.’ The frequent reception of Holy Communion by the girls through the ministry of an angel, crowned by the ‘milagrucu’ of the visible Host, are woven into the pattern like a mystic thread.”

An astounding episode, among thousands that occurred, that touched his heart was the story of the vanity compact (click here to read the story). The words of the First and Second Messages arrived at a providential moment. He discovered them at the time, “when the waning of Eucharistic faith with the consequent neglect, doubt, denial, contempt, abuse, and sacrilege had scarcely commenced.” This message “rescued my conscience.”

“The loss of Eucharistic adoration has become a constant and increasing suffering in my priestly life. All pastors are commissioned to be custodians of the Eucharist. I find myself engaged in a daily front-line combat to protect Our Lord and keep my people in their instinctive reverence and faith.”

Another topic that was a great discovery for Fr. Richard was priestly dignity, which is why he affirms: “The Eucharist can never be separated from the priesthood.”

“Mary showed a personal maternal love for all priests, because they are her sons, other Christs. The angel distributed Holy Communion to the girls only when the priest, the ordinary minister, was not in the village. Mary repeated to the girls that traditional admonition: if they met a priest and an angel at the same time, they should first reverence the priest.”

In his testimony, he confronts the delicate matter of the Second Message’s words: “Many cardinals, many bishops, and many priests are on the road to perdition and are taking many souls with them.” How can these words be reconciled with the fact that the Virgin Mary taught the girls to lovingly reverence priests? It is evident that one thing does not contradict the other. Fr. Richard states, “The words of the Message give us the very reason why the sublimity of the priesthood needs to be emphasized and why the faithful must pray fervently for the shepherds of their souls.”

Fr. Richard also speaks in his testimony about how “the simplicity of this blessed hamlet and its humble people, so childlike in faith, became for me a spiritual refuge.” It is a spiritual refuge because it is a place that has been caressed by the presence of Our Blessed Mother who, during the four years the apparitions lasted, “created a rarified atmosphere of heaven on earth.” This is precisely what Fr. Richard wanted to do in each family’s home. He was amazed at the fact that “what God has hidden from the learned and the clever, He has revealed to the merest of children.” He also points out that for those who questioned the events, “depending then on the dispositions and motivations of the questioners, the responses brought consolation, confirmation and peace, or confusion, disquiet and frustration.” “These colloquies,” he says, “remind us of the questions posed in the Gospel to ensnare Jesus in His speech, and the stunning reversal of the schemes of His enemies by terse but clinching replies.”

He ends his testimony stating that he has never doubted the authenticity of what occurred at Garabandal. He offers his testimony with joy and gratitude to Our Lady of Garabandal, who has sustained his priestly life throughout all these years.