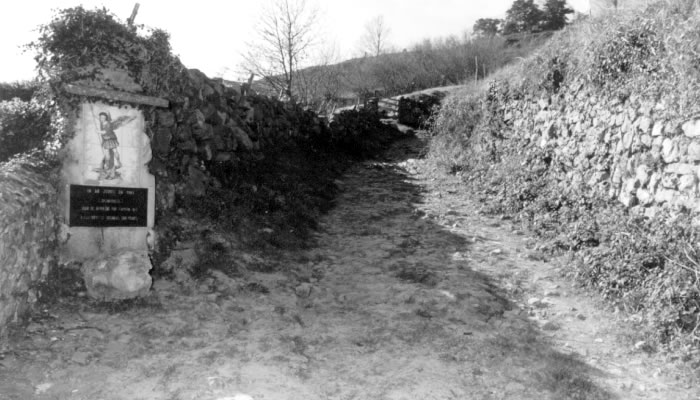 On June 18, 1961, in the little village of St. Sebastian of Garabandal, four girls, Conchita, Mari Loli, Mari Cruz, and Jacinta, received an unexpected visit from an angel. It was the beginning of a series of events that would dramatically change their lives and impact the lives of thousands of people.

It all took place one Sunday afternoon.  The girls, looking for a “little adventure,” stole some apples from a tree that belonged to a school teacher.  The tree happened to be located precisely where a steep and rocky path begins, a path known by everyone as La Calleja, located on the outskirts of the village. La Calleja winds up the mountain towards the very fields where the girls worked hard with their families to earn their daily bread.  Not long after the girls’ “little adventure,” with their hands full of apples, a clap of thunder made them tremble with fear.  It was strange, because there was not a cloud in the sky. Full of repentance for their mischievousness, they regret what they had done.  They began to think about how sad their guardian angel was and how satisfied the devil was because of their actions.

All of a sudden, something totally unexpected took place. Conchita fell on her knees and remained motionless.  Her friends were startled, thinking something horrible must have happened to her.  They wanted to run and call for help, but they themselves fell to their knees next to Conchita.  An angel appeared before them.  Later, the girls discovered that the angel was St. Michael the Archangel.  The angel didn’t say a word, nor did the girls dare to speak to him or ask him anything.  Suddenly, the girls, coming to their senses, found themselves once again alone in La Calleja.  So extraordinary was their experience that they were overwhelmed with the mingling emotions of confusion, excitement, and fear. Since no one else was around, they assumed that what just took place went unseen … yet this singular event had one and only one witness.  While the girls found their refuge behind the parish church to pour out their tears, this sole witness returned to his house thoroughly perplexed, not knowing what to think about what he had just seen.

Who was this sole witness?  His name was Vincente Mazón, who lived right on the outskirts of the village.  When the girls were having their mysterious experience, he just so happened to be coming down the mountain carrying a “log hive.”  These specific logs were constructed to obtain honey, specially crafted with several openings where swarms of bees can form their colonies.  Whether or not the log was inhabited by bees, the log hive certainly weighed a great deal.  On top of that, La Calleja was merely made up of rocks and stones.  Thus, Vincent had to carry his load down the mountain with utmost care to avoid slipping on the rocks.  He had just arrived, carrying his load over his shoulders, when he saw the girls in ecstasy.  When he saw the girls on the path, on their knees, motionless, and their heads tilted back, he thought they were playing.  When they didn’t bother to give him room to pass by on the path, he thought (understandably) they were just being rude:  “What a bunch of inconsiderate brats…” he grumbled, while he pushed the nearest girl to be able to make his way through.  The girl remained motionless, but Vincent felt a strange sensation run throughout his entire being.  Dumbfounded, he continued on his way, not knowing what to make of the situation.  When he returned home, he immediately found his wife, Oliva González, and told her everything that had just happened.   But Olivia only scolded him:  “How many times have I told you that have to eat more for breakfast… Don’t even think about telling anyone about this! Everyone is going to think you’re crazy!”

Poor Vincente remained silent, but that night he stayed wide-awake.  What he had experienced in La Calleja kept coming to mind over and over again, especially the sensation he felt the very moment he touched the girl… The next day, everyone knew what had happened the day before in La Calleja, and our witness had the opportunity to tell his own experience in detail.

“Think the worst and you won’t be disappointed,” is the way some people of the town reacted, applying the phrase to the events that took place in Garabandal.  They believed it was nothing more than a prank by the girls, who wanted to make their game last until the whole town fell for their trick. But Vincente Mazón shares what he alone witnessed in La Calleja.  Some continued to think that the girls’ story about June 18, 1961 was just their imagination… But the following days and months were filled with many events that left no room for such an easy explanation.