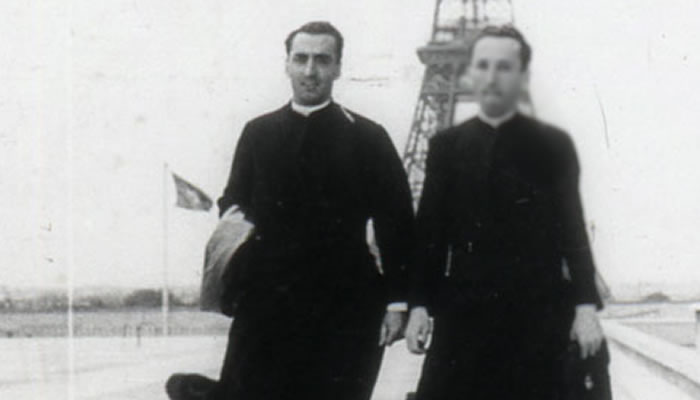 After the first message was read in the pines that rainy day of October 18, 1961, it was as if night settled in on the heart of many people. The exterior storm was accompanied by an interior gust of disappointment. Was that it? Fr. Ramón María Andreu was among those who went through a "test" that night. He had been favored but he was also tested. He related:

I was suddenly, brutally invaded by a most complete interior bitterness. It was like a mixture of painful and depressing feelings. It seemed to me that everything was dislocated and falling apart. I had just entered a moral desert. The past was muddled… only the death of my poor brother, Fr. Luis, a little more than two months before, remained clear and evident.

Then, with what was happening in the Pines, my state of interior suffering only worsened. I do not think I have ever known such desolation in my life... I felt a violent desire to leave—far away!—for America. And I said to myself, "What are you doing here? These are just a bunch of poor, sick girls. And all this, a sad comedy of backward villagers..."

I stood there for a few minutes, questioning the sky with my eyes. I would have cried out so that the great miracle would happen, which the girls had certainly never announced for this October 18. Nothing happened... and my disappointment was complete.

I changed places, and again I remained standing for a period of time that I cannot specify. I was as if unconscious. I only noticed around me the continuous passing of the crowd, which overflowed on one side and on the other. The lanterns approached and moved away in the darkness. Suddenly, one of them hit me in the face with its beam of light. A friend, who was coming down, had just recognized me and wanted to tell me his impressions quickly: "This is wonderful. This is great."

And I let him speak, replying to him in my heart, “You will understand tomorrow!” and I felt sorry for his enthusiasm. It irritated me.

Together we went down to the village. I think I had remained on the hillside for no less than an hour, watching lanterns go up and down like a nightmare.
I took shelter for the moment in a random house to get wet. But I was so disappointed that everything bothered me, which is why I went out and directed my steps to the house where they would be waiting for me. I needed familiar faces to not feel so lonely. After a while, Lola's sister Amaliuca, arrived. She is a little younger than Lola. Pointing at me and two other people, she said, "Loli says that you and you and you should go."

I had no desire or intention of going. I finally made up my mind, thinking, "Well, visiting the sick is still a work of mercy." I assure you that, if I went, it was with the purpose of saying a final goodbye to her and to everything.

We arrived at Ceferino's house and went upstairs. There were about a dozen people there, and in the middle of them, Loli. She seemed happy; I would even say joyful. I found myself a corner and began to think about the unconsciousness of that girl, and the credulity of those around her.

Then she came up to me and smilingly said, "Have a seat.” She pointed me to a type of couch. I obeyed her like an automaton, and she came and sat beside me. The conversion that followed, confidential, I do not think I will ever forget:

“Of the three of you there is one who does not believe... do you know who it is?”
“Yes, I do. Do you know it too?”
“Certainly. Our Lady told me.”
“When did She tell you?”
“Not long ago. When we were coming down from the Pines.”
“Well, let us see. Tell us.”
“I do not dare. If I were one of the other two...”
“Yes, it is me. And I do nt believe in anything anymore.”
In Loli's childish eyes shone an understanding smile. “Our Lady told us: ‘Father doubts everything, and he suffers a lot. Call him and tell him to doubt no more, that it is certainly I, the Virgin Mary, who appears here. And so that he may believe you better, tell him: When you went up, you went up happy; when you came down, you came down sad.’”
I remained stupefied, looking at the little girl. She added, “She talked a lot about you to Conchita.” I stood up. I could see confusedly that the hour of goodbyes had not yet arrived. I took the arm of my two friends, who looked at me confused and asked me, "But what did she say to you? What is it? and I pushed them towards the door, saying, "Let us go at once to Conchita's house!”
In spite of the untimely hour, Aniceta received us. “May I see Conchita?”
“She is already in bed, but you can go upstairs if you want.”
I went upstairs with the two friends. Conchita was in bed with her cousin Luciuca, a year younger than her. As soon as she saw me, without waiting for me to speak, she said smiling,
“You are probably happy. Or are you still sad?”
“I hardly know. Loli told me that Our Lady told you a lot about me.”
“At least a quarter of an hour!”
“And what did she tell you?”
“I cannot tell you yet.”
“Then I will stay the same as before.”
Conchita smiled. “Well, I can tell you something. ‘When you went up, you went up happy; when you came down, you came down sad.’ She told me everything you were thinking... And where you were thinking it... and that you were thinking, ‘Now I am going to America.’ And in another place you were thinking, ‘I do not want to know anymore about so-and-so or so-and-so...’ And you were suffering a lot. She told me to tell you and to warn you that all this has happened so that from now on, remembering all this, you will never doubt again."
As anyone can understand, I was speechless.
The next day, on a detailed photograph of the pines and their surroundings, Conchita pointed out to me with her finger each of the places where I had been and what I had thought there. I can assure you that she was not wrong about anything.