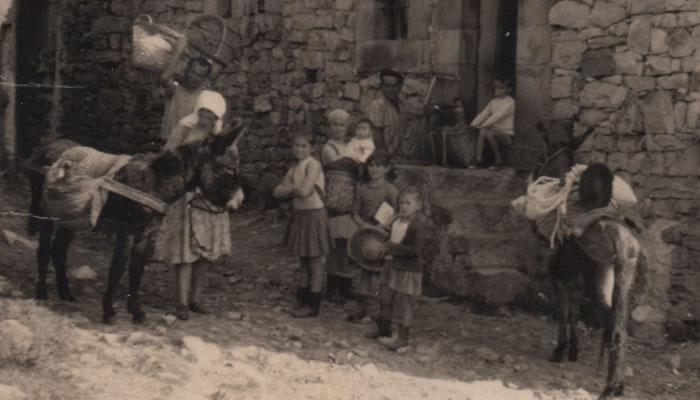 Servando was going to get married to Teresa Mazón and the whole household was getting everything ready for the newly wedded couple. Servando's father, who worked in a quarry and whose name was also Servando, fixed up a house for them. The house was built on top of a stable and was situated near Aniceta's fountain. There was a stone outdoor staircase leading up to the house's front door. The staircase had 6 or 7 stone steps finishing off on a type of landing which led into the house. It was there that the newly wedded couple was going to live. It seemed that not even Servando's brothers new where there future house was and where they would be sleeping their first wedding night.

It happened that when night-time came, Servando and Teresa heard at knock at the door. They ignored it at first, thinking that since nobody knew that they were there, it must be some noise in the street. But when the knocking continued, Servando went out to see what was going on. He opened the door and there before him he found Loli in ecstasy. Without further ado, she entered the house and with the crucifix in hand she blessed the newlyweds’ bed and the walls of their new simple home. At that time nobody suspected the crisis that Spain would later suffer from the attacks on the family. Looking back on Our Lady's gesture here we can see its great value. On the difficult path which the spouses must go down in order to live their vocation to love and be open to life, the Virgin Mary makes herself even more present to encourage, to comfort, and to teach how to love.

When Loli had finished she headed towards the door to leave, still on her knees and in ecstasy, and with her head looking upwards at the vision. When she had reached the "landing" she looked again towards to door. Suddenly something unexpected happened. Instead of going down the staircase she jumped. Just as she was, knelt down and with her back towards the street, she jumped down from the landing to the ground. She reached the bottom without a problem and without even losing her balance, as if it were the most normal thing in the world.

The old stable that belonged to Servando and Teresa has been fixed up recently, but still maintains the structure of the original staircase. Anyone who passes by can see it. There is now a small wall on the landing, something like a banister, but you can still see that it was something extraordinary that Loli jump from such a height landing on her knees. It's about 1 meter 80 centimeters high. During the times of the apparitions it probably had one or two steps less but even so it would have been almost the same height. After having jumped, Loli continued in her ecstasy as if nothing strange had happened, but the onlookers couldn't explain what had happened as something normal.