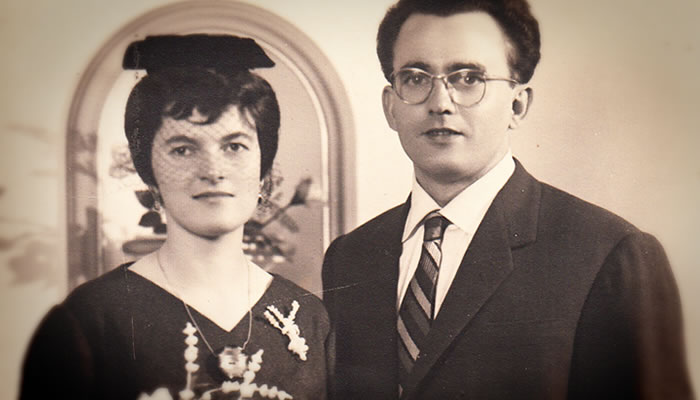 This story took place during a wedding celebration. The protagonist is the Bride herself, Jacinta Cosío Mazón, who married José Ramón González González. Obviously this Jacinta is not the same Jacinta who was one of the visionaries, as the bride was much older. We haven't been able to pinpoint the exact date of the wedding, but it was definitely during the first year of the apparitions. In Garabandal it wasn't normal to celebrate weddings during the summer, but rather a few months later. That way all the hard, summer work was over and the newly married couple could enjoy the first weeks of marriage in peace and rest. Summer was not a moment for rest in Garabandal, but a time to make sure that all the family and animal needs could be taken care of during the next year. If anyone decided to get married during the summer, they could be sure that their "honeymoon" would include getting up early the following morning to go off and work in the fields.

Jacinta and José Ramón's wedding celebration seemed to be going fine. As was the custom, some of the ladies from the village had prepared a lunch to celebrate with the family in Ceferino's bar. After lunch the guests had fun just talking and celebrating together. Ceferino was Loli's father and their own living space was situated on top of the bar. Suddenly a sound was heard and everyone kept silence, looking towards the staircase which Loli was descending. She was in ecstasy and was heading towards the street door. Manolita Mazón was among the guests and she gives her own testimony of what she saw. Loli "came down" the stairs; she was lying on her back with her head downwards and herfeet upwards. If anyone tried to imitate the position, they would end up in a mess; but she did it with such harmony, without difficulty or tiredness. Her hands were together in front of her chest. Her skirt was perfectly placed, challenging the law of gravity, and her legs were surprisingly covered in all moments. Her face was transfigured and she was speaking full of peace and joy to her vision. It seemed as easy as if she were just sitting down, but she was lying down, head-first, descending the small, steep staircase.  In each ecstasy, miracles like this one took place. When she got to the bottom of the stairs, she went outside, leaving the bar, and looking upwards as usual.

Once she had disappeared from sight, the guests went back to talking and did not pay much attention to where the girl weny. In the village, as usual, there were a lot of visitors, all waiting to see an ecstasy. Where did Loli go? She turned towards a big house behind her own house. The house is now called "La Casona". It's where Jacinta, the bride, had lived with her mother's parents. At that time, none of the villagers would usually lock the doors of their houses. Loli went into the house and, without knowing her way around, went straight to Jacinta's bedroom. She opened the drawer in the bedside table and took a Scapular medal from it. Why did she do that? It was the room where Jacinta had prepared herself for the wedding and where she had exchanged the scapular medal of Our Lady of Mount Carmel for an elegant necklace. The Scapular had been placed in the drawer. Could anyone have known this? No, not even her mother or her grandmother. If anyone had happend to notice, they would not have known where she had placed it. Only one person knew: Our Lady. She led Loli to the exact spot.

Loli took the medal and she quickly went back to the bar. She went up to the bride, as she always did: looking upwards. She knew where to go because Our Lady was guiding her. She went and stood in front of the Bride and placed over her head the medal, while saying: "Our Lady asks you to not take it off." We can only imagine what Jacinta felt in that moments and we can be sure that she never took the scapular off again.

It would be good for everyone to re-read the promises of Our Lady for wearing the scapular in order to better understand this story. Wearing the scapular is in itself a consecration to Mary.  It means that you place yourself beneath Mary's mantle, looking for protection.  "Your adversary the devil prowls around like a roaring lion, seeking some one to devour." (1 Peter 5:8) You don't want to be harmed.

Our Heavenly Mother's loving care continues to surprise us. In Garabandal, things like this took place daily during the times of the apparitions. Our Lady wants to tell us over and over and: "I am a Mother. I am your Mother. That it why I come to tell you all I do. Listen to me!".