At the Death of David Toribio, Garabandal Witness 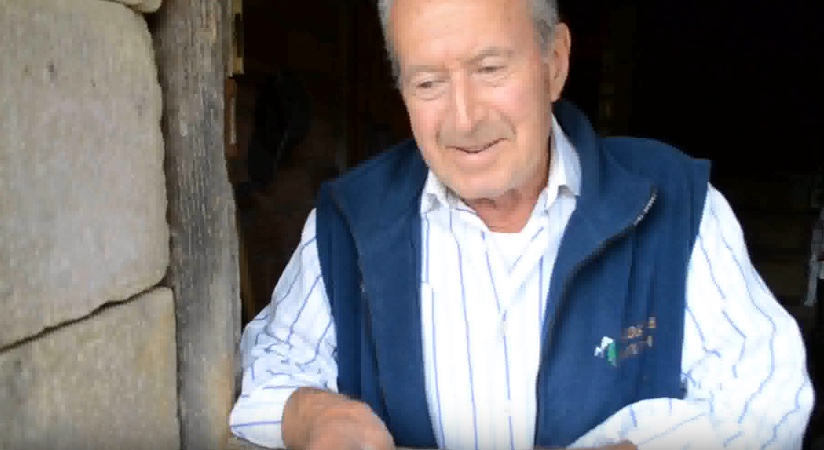 On April 15, 2020, David Toribio, one of the most important surviving witnesses to the apparitions of the Virgin Mary in Garabandal, died at the age of 85. David patiently repeated the facts that he had witnessed to each of of the hundreds—perhaps thousands—of pilgrims who questioned him over the years. He stated clearly, "Every day I am surer that it was true. Each day I am surer." Yet David did not always speak with the same certainty about the supernatural nature of Garabandal's apparitions. To understand, we have to go back to the days of the apparitions.

David was 26 years old when, on June 18, 1961, Saint Michael the Archangel began to appear to the four girls—Conchita, Jacinta, Mari Loli and Mari Cruz—preparing them for the Virgin Mary’s visit. The next day, he was sitting with some other young men along the road into the town when Conchita happened to pass by. One of the young men asked the oldest of the girls with a sarcastic air, "So, what was the angel like? Was he carrying a bag? Did he have a walking stick? What did he look like?" Conchita went away, embarrassed at the boys' teasing as they continued to mock the girls, but only until they saw the first ecstasy. At that moment, their initial skepticism was cut short. David confessed, "What a sight... the girls were not themselves anymore. Everything about them had changed: their smile, their way of speaking ... You could not even recognize them. It was an extremely powerful sensation." David could not help being moved by remembering the girls' relationship with the Virgin Mary: "It was a very intimate relationship, one of a very great love. They became so happy. 'Oh, you are leaving? But you've only been here for a few minutes.' They wanted to be with Her. The relationship was incredible."

That first summer—1961—almost all the ecstasies took place in the Calleja, a stone path on the outskirts of the town that goes up to the Pines. After a few days, as word spread, a growing number of outsiders gathered around the girls in ecstasy. Young men had to help protect them from the crowd. With some stakes well-nailed into the ground and some planks, the boys made a square space that they named El Cuadro. Only the girls were allowed to step inside and, along with them, doctors and priests authorized by the families. And that was enough because, as David recalled, "When the girls were on their knees in ecstasy, people would stick things in their legs, or burn them. They did all kinds of things!" When the girls began to leave El Cuadro, walking in their "ecstatic marches" through the streets of the town, the young men tried to follow them to protect them. And on the day the girls announced the Virgin Mary's first message, October 18, 1961, they were also there, organizing a human chain to surround them and prevent them from being crushed.

From that privileged position, David saw incredible things that deeply affected him. "Later on," he explained, "comments from knowledgeable people started to come, and you found yourself sitting on the fence about what to believe." He went down to the Torrelavega Cattle Fair, where ranchers from other towns burst out in mockery and jokes when they found out that he came from the town of the apparitions, and David became confused. Or he would read in the newspapers that "the events in Garabandal was a girls’ game" or a problem of "four hysterical girls." So he thought, "But how can the newspapers say that? How can these people who say they know, who say they understand, speak like this? And one day someone—I don't know if it was Ángel—said, 'What is more important, what we see with our own eyes, or what these people say and write?' We replied, 'No! What we see is much more important!' 'Ah, well then, they say one thing and we see another.' It was a difficult time. It was a strange time."

The poor bastianos, the name of the inhabitants of San Sebastián de Garabandal, suffered a lot at that time. But later on, they would see once again the overwhelming display of extraordinary and scientifically inexplicable signs that were accumulated in the ecstasies, and hope was rekindled in their hearts. David recalled one of those times that impressed him a lot: "One day when [the girls] went up to the Pines, the whole town went up with them. And when the four of them were looking at the Pine where Our Lady is now, at one point, they started going backwards, and backwards, and backwards, and they went backwards all the way down to the town. But there is a rock there, about three yards high. And they went down backwards. It is totally impossible. […] How did the girls go down that way? No one saw how. Someone brought them down. Someone. If not, it is impossible." David was convinced that the "someone" who took the girls down the incline safely was the Virgin. So he repeated the exclamation he heard from the writer Mercedes Salisachs: "Well, if these girls do not see the Virgin, if it is not the Virgin who is carrying them, they must have eyes on their feet, because they never stumble or fall in the mud puddles."

After a couple of years witnessing how Heaven came down to his village every afternoon, David moved for work and left Spain. When he returned, after years, it was all over. For quite some time he kept away from the flow of the pilgrims. Until one morning, some thirty years ago, "the lightning strike happened in the Pines." That day, David changed his attitude radically.

What happened? "One night there was a huge storm. A powerful crash of thunder woke me up. The house shook, and I thought to myself, 'Lightning hit somewhere in the town.'" But the fact is that, when leaving home, he found that the town had not been struck by lightning. David had a premonition: "It hit the Pines." Indeed, it had. The lightning had struck one of the pine trees, exactly the second one coming up from the Calleja: "I went to the Pines and, before reaching the top, I saw what happened. I couldn't believe it. That day I was in shock. It was an incredible miracle." At the time, there was a small image of Our Lady of Mount Carmel on that tree, supported by iron plates. It had been put up by some Valencians in 1961 and had remained there even though later another image of the Virgin Mary was put up in an enclosed casing in the central Pine, where people drew near to pray. David explained: "When [lightning] hits a tree, it follows a course. The lightning has to go down to the bottom the tree until it ends in land or water. [The lightning bolt] struck one of those very long branches and went to the trunk that was like this, very big. It went down the trunk and when it reached the image, it disappeared. It turned and [jumped] to the first pine tree. The lightning broke the branches of the first pine. I was amazed. If it had continued, if it hadn't made the curve, it would have hit the Virgin, it would have completely destroyed the statue. Now the image has been taken away, although you can still see the iron plates where the steel sheet rested. But you can see how the lightning didn't continue its normal course."

For those of us who were "city kids," this anecdote may not say a whole lot. But a man like David Toribio, born and raised in the mountains, who lived the laws of nature and knew that they are immutable, understood that he was standing before a miracle, a new sign of supernaturality. The lightning bolt had diverged from its natural path to avoid damaging the statue of the Virgin Mary: "That day I was left... I cried there. Because we, who know the mountains and know how this works... Of course, it was something incredible. That day, I remembered things [that I had seen during the apparitions] and I promised Our Lady, there, on my knees, that I would change totally, because I had to! I had to!"

During the last years of his life, it was easy to find David in the Calleja at dusk, the place where he had witnessed so many events. He used to walk silently, pondering his memories. His memories became prayer, because for him, remembering all he lived in that place meant entering into dialogue with Our Blessed Mother in Heaven. If you were able to find him in those moments, he would begin to murmur quietly, "You know? Do you know what happened one day?" And you received the gift of one more piece of the precious history lived in those mountains between the Our Lady of Mount Carmel and the four village girls.

We pray for David's soul, heartfully wishing that this man, who possessed the wisdom of simple souls who open themselves to God, is already in Heaven seeing the face of Our Blessed Mother.